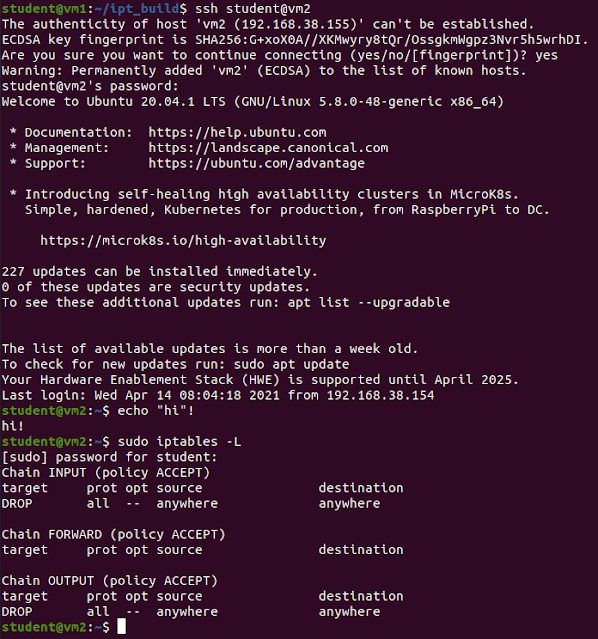 iptable_evil is a very specific backdoor for iptables that allows all packets with the evil bit set, no matter the firewall rules.

The initial implementation is in iptable_evil.c, which adds a table to iptables and requires modifying a kernel header to insert a spot for it. The second implementation is a modified version of the ip_tables core module and its dependents to allow all Evil packets.

I have tested it on Linux kernel version 5.8.0-48, but this should be appliciable to pretty much any kernel version with a full implementation of iptables.

Explanation of the Evil Bit

RFC3514, published April 1st, 2003, defines the previously-unused high-order bit of the IP fragment offset field as a security flag. To RFC-compliant systems, a 1 in that bit position indicates evil entent and will cause the packet to be blocked.

By default, this bit is turned off, but can be turned on in your software if you're assembling the entirety of your IP packet (as some hacking tools do), or in the Linux kernel using this patch (mirrored in this repository here).

How does the backdoor work?

When a packet is received by the Linux kernel, it is processed by iptables and either sent to userspace, rejected, or modified based on the rules configured.

In particular, each iptables table uses the function ipt_do_table in ip_tables.c to decide whether to accept a given packet. I have modified that to automatically accept any packet with the evil bit set and skip all further processing.

I also attempted to add another table (iptable_evil.c) that would accept all evil packets and hand others off to the standard tables for processing, but I never figured out how to pass the packets to the next table and decided that the ipt_do_table backdoor was enough as a proof of concept.

Why did you do this?

I needed to do and write up a decently large project in computing security for one of my classes, and this seemed like a cool idea. This is probably more work than he was expecting for this but ¯\_(ツ)_/¯.

The evil table requires modification of kernel headers, so installing it requires running with a kernel produced through the full tree build.

Copy the contents of replace-existing to your kernel source tree, overwriting existing files. Copy iptable_evil.c to linux-X.Y.Z/net/ipv4/netfilter (optional) copy ip_tables.c to linux-X.Y.Z/net/ipv4/netfilter Compile the kernel according to your distro's process (should produce a package) Install the package file Reboot into your new kernel iptables -t filter -L iptables -t evil -L (this will have confused output, but it will load the module)

This is significantly easier and faster, but does not support the evil table and marks the kernel as "tainted". It should be possible to copy the ko files produced by this to another computer with the exact same kernel version, but I haven't tested it.

To test this, you either need to rebuild your entire kernel with this patch or create your own packets using a tool like Scapy. I went with the first option because I was already building the kernel for the evil table.

In the first screenshot, I have blocked all traffic to this VM in iptables, but I am still able to connect over SSH because my packets have the evil bit set, as the second screenshot shows.

When connecting to the backdoored VM from a VM that does not set the evil bit, the SSH connection will eventually time out.

Packet captures of backdoor and non-backdoor SSH connections are in the docs/ folder in this repo for your perusal.

5.8.0-48-generic (Ubuntu 20.04) RFC 3514 inventing the evil bit: https://tools.ietf.org/html/rfc3514 Ben Cox's introduction to the evil bit: https://blog.benjojo.co.uk/post/evil-bit-RFC3514-real-world-usage Ben Cox's iptables_uwu (mostly just for giving the names of things to research): https://github.com/benjojo/iptables-uwu A somewhat outdated but very detailed explanation of how iptables works and how to add targets and modules to it: https://inai.de/documents/Netfilter_Modules.pdf https://upload.wikimedia.org/wikipedia/commons/3/37/Netfilter-packet-flow.svg Bootlin's Elixir search is significantly easier to use to find identifiers in the kernel than grep: https://elixir.bootlin.com/linux/v5.8/source/net/ipv4/netfilter/ip_tables.c#L225 Ubuntu's docs explain how to build the kernel: https://wiki.ubuntu.com/Kernel/BuildYourOwnKernel

Frelatage - The Python Fuzzer That The World Deserves

Findwall - Check If Your Provider Is Blocking You!

RedTeam-Physical-Tools - Red Team Toolkit - A Curated List Of Tools That Are Commonly Used In The Field For Physical Security, Red Teaming, And Tactical Covert Entry